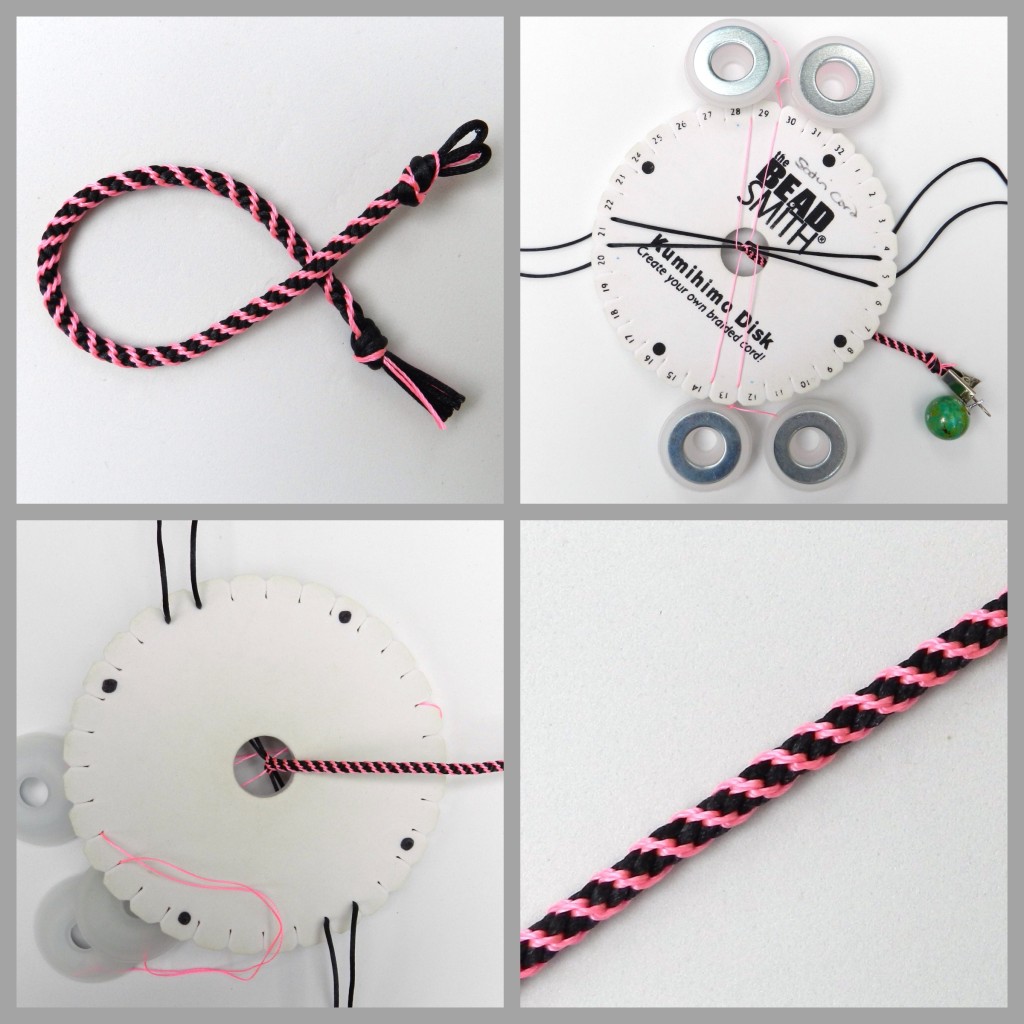 I am often asked what weighted bobbins are used for. Today I have been working on a sample braid for a workshop and as I needed to use the bobbins it seemed a good opportunity to write a blog about how I use them.

A good kumihimo disk should be able to grip the cords sufficiently to maintain an even tension. I always recommend reserving a disk for fine cords and using a different disk for the wider ones, but there are times when you may want to use a combination of thick and thin cords. If so, you do not want to risk stretching the slots on the fine cord disk, but the wide cord disk will not grip the finer cords. The best solution is to use the wide cord disk and to add some weight to the thinner cords. Weighted bobbins are the most convenient method. A weight is also required on the braid, even for those who usually prefer to braid without a weight. In the example above I have used 1mm satin cord in black and neon pink S-Lon Tex 210. Without the additional weights the S-Lon will not form a regular stripe in the braid and random loops are likely to form. In addition, it is more difficult to keep the point of braiding in the central position in the hole of the disk.

Weighted bobbins also have a use when using an old disk. While there is no substitute for a good, tight disk, slipping cords on an old disk can be minimised by using weighted bobbins and a reasonably heavy weight on the braid. However, I would not recommend using this method too frequently. People who braid regularly should be mindful of the well-being of their hands and wrists. Braiding with more weight than necessary is not wise and a new kumihimo disk is not expensive!

My tip for using weighted bobbins is to make sure you tie a knot in the end of each cord. When there is plenty of cord on the bobbin it will stay wound up. However, when the cord starts to run short the bobbin may slip off. If there is a knot in position, the bobbins can be allowed to slip down to the end of the cord and dangle. It is important not to remove them altogether until the braid is finished or the appearance and regularity of the braid will be affected.

These are a couple of examples of designs where weighted bobbins would be useful. Both of these bracelets are 16 slot Round Braids. Chunky yarn was used to give the bracelet body and structure, but the tiny beads needed to be threaded onto S-Lon. I made these before I had the weighted bobbins, so I taped £1 coins onto my regular bobbins, but if I made them again I would not need to go through all of that!