I am really pleased to be able to offer the Riverside Beads 7 cord disk for sale from this website. What is so good about it?

First of all, I will tell you a bit about this braid. It is a very simple construction and early examples are widespread, so its origins could lie in several different cultures. Early examples have been found in Europe and has been used in straw plaiting and hair braiding. There are also suggestions that it is Viking in origin and that it was made on a round disk called a trollen wheel, but the historical accuracy of this is disputed by some researchers. The likelihood is that as it is such a simple construction it was used independently by different communities. It is sometimes referred to as kumihimo, but traditional Japanese braids have an even number of cords, so purists point out that it should not be called kumihimo. However, now that the foam disk has taken kumihimo way beyond its traditional roots and into the realms of creative jewellery making  I think it is pedantic to make this distinction. For me, the creativity is way more important than the name!

The braid is known variously as the 7 cord braid, the 7 strand braid or Fill the Gap and there are different ways of constructing it. The Braid Society has instructions for making a cardboard disk, Sally Battis and Jamie North offer templates to be used with a kumihimo disk, YouTube videos show how to mark up a regular disk, the Prumihimo disk can be flipped over and used for it and now this dedicated 7 cord disk can be purchased. All these methods do the job well and it really comes down to personal preference. However, I have used all of these methods and now that I have a dedicated disk for this braid it is my go-to tool for the 7 cord braid.

This disk was developed by Donna McKean Smith, owner of Riverside Beads, who is a published author of kumihimo books and a regular presenter on television. The disk uses a numbering system to guide the braider through the moves and it is made of good quality foam with a large central hole, which is useful for braiding larger beads. What sets it apart from other disks is the flower shape, which I find useful for guiding your eye and hand to the slot positions. This is particularly useful when you start to build your confidence, because it is at this point that you start to rely less on the numbers and more on the rhythm of the moves. If you like to have a dedicated tool for your favourite braids this would be a very good purchase.

At first glance the braid itself resembles the round braid/kongo gumi made on the regular round disk or marudai because the structure is spiral and it can be made with or without beads. However, on closer inspection the 7 cord braid can be seen to be slimmer and more flexible than round braid. When it is fully beaded the beads are slightly further apart on the 7 cord braid, making it much more flexible. As there are only 7 cords and the spacing is slightly wider the braid used fewer beads and is faster to make up. The braid really comes into its own when you start to braid with beads of different shapes and sizes and some of my favourite designers have put together some great kits, which make use of this feature of the braid. I recommend clinking on these links and taking a look at the kits available on these websites,

Sally Battis’s Sallybeadjewelry  (temporarily closed, but reopens at the end of the month)

The Riverside Beads 7 cord disk is available from Riverside Beads for UK customers, but they are not currently shipping overseas. On this website I am offering the disks in several ways in order to make best use of the shipping categories. 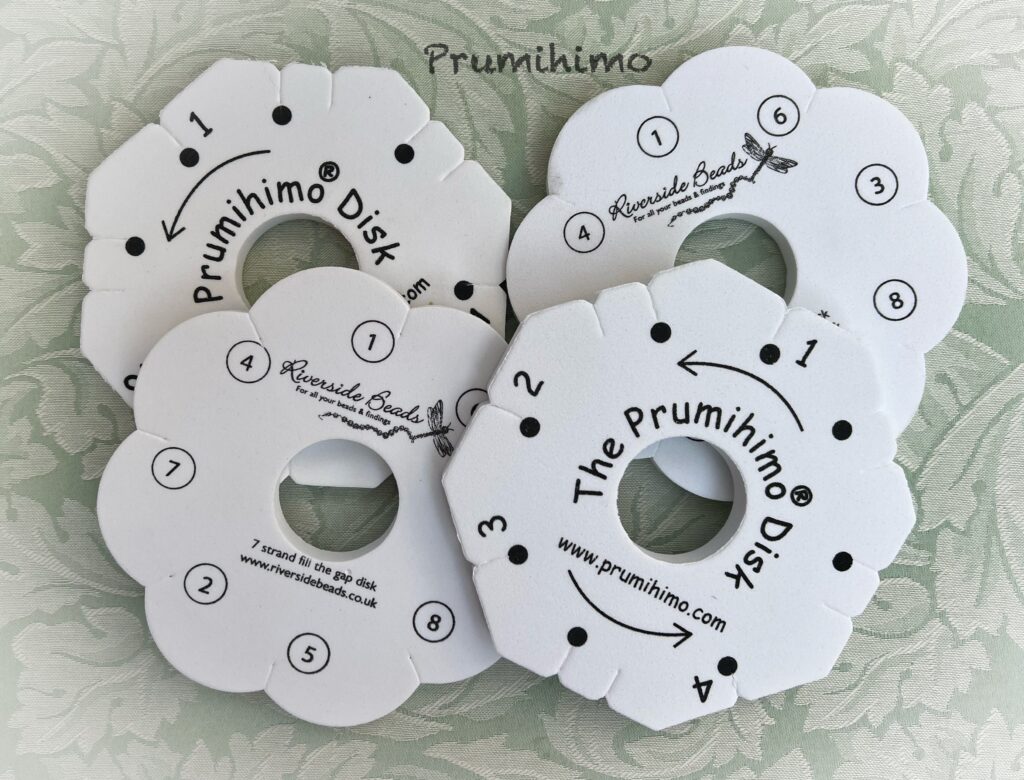 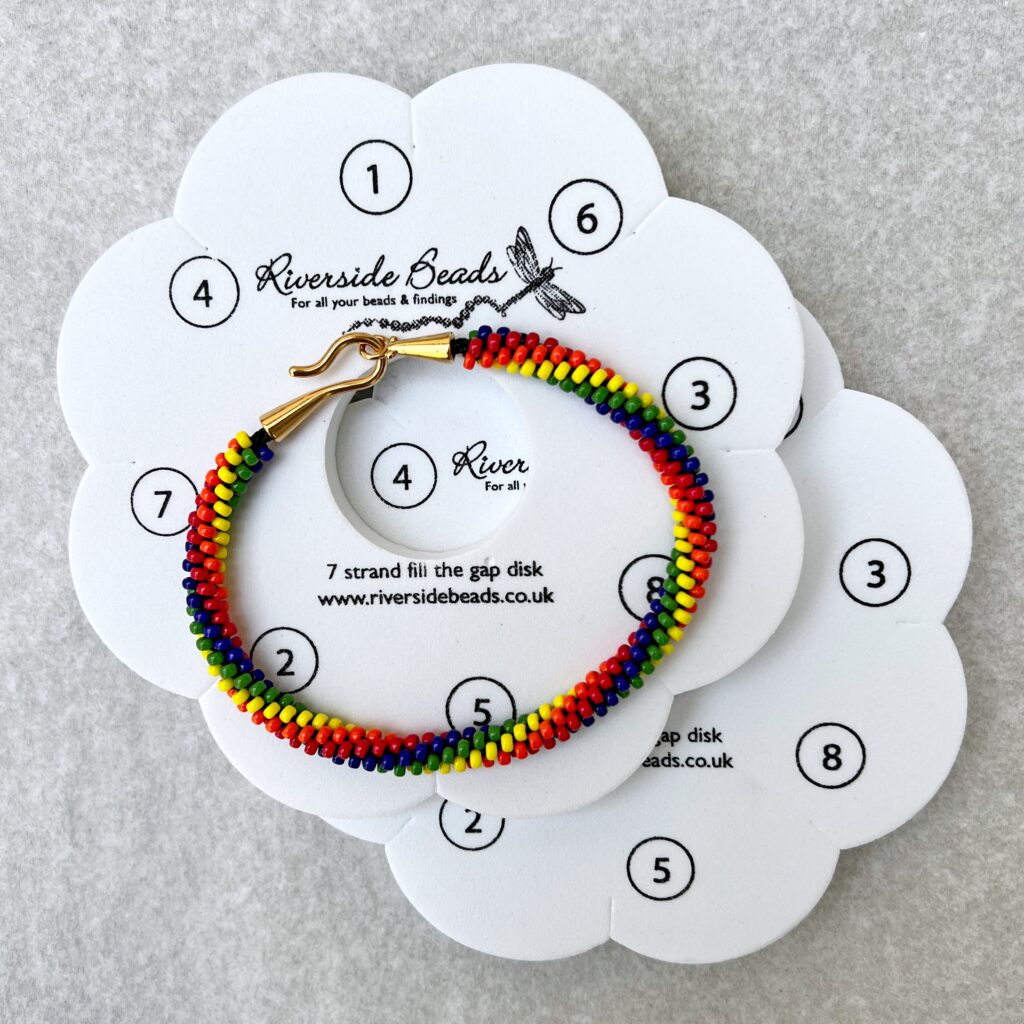 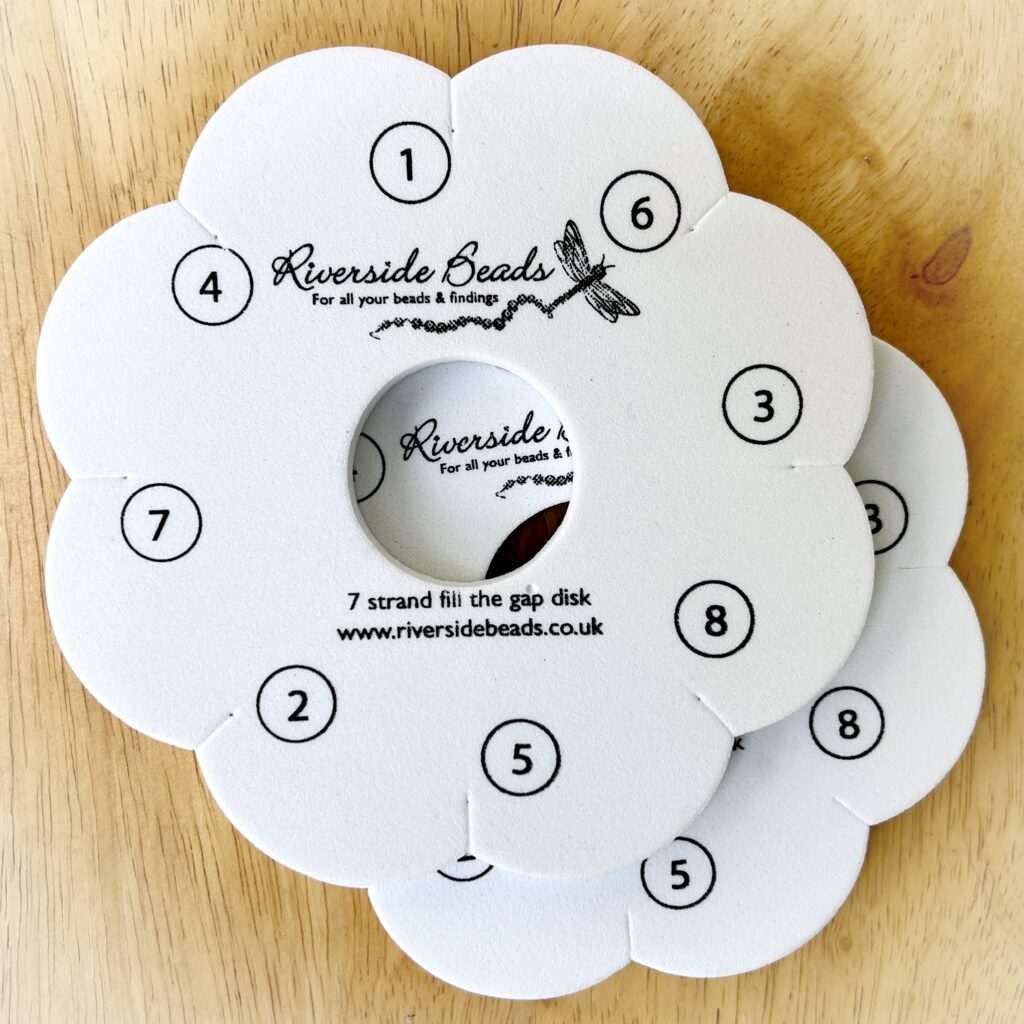